“Broadsword to Danny Boy. Over”

In the time that I have spent between watching this film for the first time and sitting down to finally write a review of it, I have discovered a startling bit of trivia. Two directors whose work I greatly admire (namely, Steven Spielberg and Quentin Tarantino) have gone on record in the past as saying that Where Eagles Dare should be included in a list of the greatest war movies ever made.

I’ve only watched it once. I admit to not being an expert. But I can tell you with 100% certainty that I completely disagree with their assessments. Which is not to say that I disliked it. I rather enjoyed it. But in the time that it took me to decide what it was I actually wanted to say in my review of it, I haven’t really been able to come up with much more than a rather generic “I liked it.” It’s a serviceable war film. It has some decent action sequences. But the film, as a whole, has little personal resonance for me. I’ve seen it. I enjoyed it. I doubt that I will ever watch it again.

In actuality, I confess to being flummoxed as to why Clint Eastwood would have chosen to do this film in the first place. At the time of its release, he was in the midst of making a name for himself. He’d done three well-received spaghetti westerns that helped make him a star. Then, he filmed a western in America that is still regarded five decades later as a classic of the genre. He followed that up with a poorly-conceived action film in which he plays a character that is not very likable. Then, strangely, he follows that up with a somewhat bland war film in which he has little dialogue and doesn’t do much besides stand in a hallway and mow down Nazis with a machine gun. It’s very, very strange.

Was the attraction to doing this film the opportunity to perform opposite Richard Burton? I can buy that, but this movie was made in an era where Richard Burton was in a booze-fueled plummet from movie stardom to (almost) irrelevance. Co-starring opposite Richard, at this point, was not something that was going to help your career. It may not hurt it, by any means, but it wasn’t going to help. As a Clint Eastwood film– and let’s face it, Clint’s involvement in the picture is the only reason that I am taking the time to write about it– this strikes me as a very minor entry in a lengthy filmography. If I were rating and reviewing this film solely on its relevance to the Clint Eastwood canon, I’m not sure I could even muster up one star as a final rating. But rating and reviewing the film as a war narrative, regardless of its star, I have to admit that it holds up rather well for a film from the late 1960s.

I was engaged by it. I never got bored. I can’t think of anything about it that I find inherently wrong. It just doesn’t have any personal significance for me. Not enough, anyway, to be a film that I will be thinking about for years to come.

The plot . . . is complicated. In one sentence: During World War II, Major Smith (played by Richard Burton) leads a group of spies behind German lines to rescue a British general from an Austrian fortress before the Germans can torture him to get information on the impending Allied invasion of Europe. But that’s not really the plot. That’s, like, the plot they tell you so that they can draw you in and have an easy blurb for newspapers and movie listings. The real plot is much more complicated than that. The real plot is so complicated and convoluted, in fact, that if the film opened with a title card that says “This film is based on a true story”, moviegoers with even a lick of intelligence would be screaming “You’re lying!” somewhere within the second reel. The plot is so complicated that it lacks credibility. Thank goodness that there’s plenty of action to detract.

I’ll get to the action in a moment . . . I’m not finished quite yet with the plot. Within an hour or two of Major Smith and his crew parachuting into enemy territory, Major Smith has wondered off for a clandestine meeting with an attractive blonde named Mary (played by Mary Ure). In their conversation we learn that Major Smith is intentionally keeping important details of the mission secret from the rest of his crew. It’s clear that Major Smith is not completely on the level. It’s clear that there is more to this mission than just rescuing a general. As the film progresses, we learn about more and more minutiae that isn’t what it initially seemed. For example: the waitress at the pub (played by Ingrid Pitt) is also a spy and a member of Smith’s crew. For example: the soldier that died during the parachute drop in was clearly murdered. For example: the general that they’ve come to rescue isn’t a general at all, but a has-been actor (played by Robert Beatty) who merely resembles the general. For example: why on God’s green Earth has an American soldier (played, of course, by Eastwood) been recruited for a mission for Great Britain? The list goes on and on, more and more questions, more and more switcheroos, more and more confusion. Major Smith appears to have turned against his men. No, wait, that was also part of the ruse.

Ultimately, in the end, all of the questions are answered (the mission was actually an elaborate ruse to track down a double agent operating in their midst), but we’re left to scratch our heads over whether or not all of the tricky tricky plot contrivance really makes any sense.  Here’s a hint: no, it doesn’t.

Ludicrous plot aside, there is a lot to admire in the action sequences. The last hour and a half is just about one explosion after another as our man Clint corrals seemingly-endless hordes of Nazis into stairwells and hallways long enough for them to realize that they are about to be gunned down. At one point, he uses their own grenades against them by shooting them back down the hallway into the assembled crowd. Finding clever ways to kill Nazis truly seems to be Eastwood’s sole purpose in this film.

The best–and most memorable– action sequence belongs to Richard Burton. It would be worth checking the movie out just for this one scene alone. The fortress (or schloss, as the Austrians refer to it) is high upon a mountain face that is accessible for humans only by helicopter or a long, arduous ride via cable car (it is remarked during debriefing that only eagles can get to this fortress, hence the film’s title). A big deal is made throughout the film about the cable car, enough to telegraph that it will be important later. Early in the film, Eastwood and Burton manage to sneak into the fortress by riding on top of it, but later the cable car becomes a wrestling ring of sorts as Major Smith keeps precarious balance on the roof while Nazis make every effort to knock him off. It’s a tense sequence, made all the more tense by a lack of music scoring. You can hear every cable creak, every ting of Major Smith’s pick-axe (!!) as it strikes the Nazis hands, every groan as wrists get bent in the wrong direction. This sequence alone is easily why this film might be regarded by many as a classic of the genre. 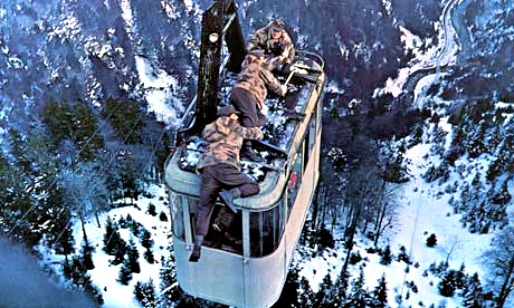 Bottom line for me with this film: if not for my desire to watch and review all of the Clint Eastwood films, I may not have ever sat down to give this movie a chance. Now that I’ve watched it, I’m glad that I did. It was a fun diversion for two and a half hours. Lots of family-friendly action (despite a high body count, the film is virtually bloodless), a star whose talents and ability to carry a film speak for itself, and a no-holds-barred commitment to seeing that every bad guy gets his just desserts make for a high-energy action film. Enjoyable, but not essential.