“Lady, if you weren’t a nun, I’d let you save your own bacon”

Shirley MacLaine appears for all intents and purposes to have flown completely off the deep end somewhere back in my childhood. President Jimmy Carter once had her on network television for a lengthy-live interview to talk to the American people about UFOs. Her daughter, Sachi, claims that her mother told her at a very young age that her father, Steve, was not, in fact, her father, Steve, but a clone of her real father, who was an astronaut named Paul. As recently as 2016, she has claimed in interviews that she remembers a past life in which she was there at . . . wait for it  . . . the sinking of . . . I am not making this up . . . Atlantis. She once stated that she believes that the victims of the Holocaust were just experiencing the results of their own karma. Also, apparently, Stephen Hawking subconsciously caused himself to develop ALS as a means to better study psychics. I mean, it’s just like . . . Shirley MacLaine is batshit.

Yes, she might be, by today’s standards, what the people rudely refer to as “cray cray”, but she was cute as hell back in the day.

Sweet Charity. Ocean’s 11. The Apartment. Irma La Douce. That smile. The dimples. Those eyes. She’s adorable. Even in Cannonball Run II — a film that would cause even the kindest critic to struggle for positive words– she’s just as cute as she can be. Terms of Endearment. Postcards From The Edge. She was much older by that point and still strikingly pretty. She’s an undeniably attractive woman, and she can act. This is a woman who has been nominated for an Oscar six times. She even won one (for the aforementioned Terms of Endearment in 1984). Her obvious talent cannot be denied.

On the off chance that you haven’t figured it out yet, I have spent several paragraphs lamenting my own adoration for Shirley MacClaine because she is Clint Eastwood’s female co-star in Two Mules for Sister Sara, Eastwood’s follow-up to the less-than-watchable Paint Your Wagon. It was a wise move to follow that movie with this one: this is landmark Clint.

Set just after the American Civil War, Two Mules for Sister Sara centers around Hogan (played by Eastwood), a former soldier who happens upon a naked woman in the desert (played by MacClaine) moments before it appears she is about to be brutally raped by a group of drunken bandits. Hogan rescues her, only to be shocked that his damsel in distress is a nun. Her name is Sara, and she claims to be raising money to aid Mexican revolutionaries in their war against the French. Hogan himself had made arrangements with these same revolutionaries to attack the French garrison in exchange for half of the spoils. When Sara requests his protection for her trek home, Hogan agrees, figuring that he could use the assistance of the nun in locating the garrison. From here the plot becomes harder and harder to summarize succinctly.

For the first half of their journey, the two are at odds. She’s a nun, after all. She doesn’t play well with drunken, foul-mouthed, roughnecks like Hogan. Hogan, however, ends up wounded by an arrow in a skirmish with Native-Americans, and the two become reluctant partners. He has to protect her from wildlife at night. She has to pull an arrow out of his chest. They argue. They banter. She wards off his advances. He is surprised at how well (and often) Sara drinks the whiskey. She must act as a balance so that he can fire a shotgun with one hand at the dynamite set to destroy a train full of French ammunition. It’s almost a buddy movie; Midnight Run, if Charles Grodin were a good-looking woman dressed as a nun.

The second half is more straightforward as a Western. It concerns the attack on the garrison, a complicated heist that involves Hogan nervously posing as a bounty hunter wanting to collect the reward for Sara, who by this point has revealed herself to be not a nun at all, but a prostitute. The nun habit was just a clever disguise to keep the French from locating her. Without the habit, Hogan is now free to make a move on her. But he has to destroy the garrison first.

If this film has a flaw, it would be in this act. To this point, the film had been funny and quirky. This final sequence is harrowing and violent, a complete tonal shift from the previous section of the film. Even as clever as the heist tuns out to be, the execution of it is little more than unrivaled carnage for a solid stretch of time. Explosions. Gore. Clint Eastwood gleefully mowing down Frenchmen with a Gatling gun. Not at all what viewers should be expecting from the film’s tone so far. 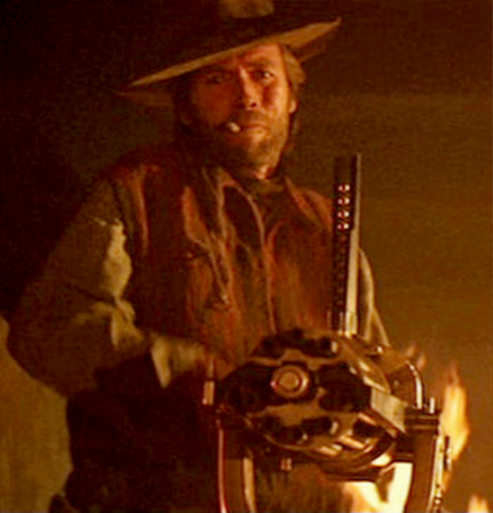 It should be noted that this tone shift in no way kills the film for me; but film-goers should be advised if brutal violence is not their cup of tea.

This is, legitimately, one of my favorite Clint Eastwood films and it has been for quite some time. Instrumental to that enjoyment are the performances from the two leads. Shirley MacClaine is sassy and charming (and, yes, god damn adorable). Clint has never been better to this point. Perhaps its having such a fantastic female lead to bounce ideas off of, but this is the first time that Clint seems to be doing more than just shooting a lot without saying much. It’s really the first film in his career to date where I find the character that he is playing likable. He’s likable enough in Hang ‘Em High, I suppose, but I like this character better. This character has motivations beyond vengeance. This character has a conscience.