I have been called for jury duty four times in my life.

The first time was in the fall of 2002. I went in as I was asked to, but was excused at the end of the first day when it was realized that I hail from the small farming community of Gibson City, Illinois. The defendant in the case on the docket that week was also from Gibson City, so I was not selected because his attorneys thought that I would have an inability to be impartial. I confess to wondering for a good long while if I actually knew the person in question, and wondered what that person might have done.

The second time that I was called was in early 2004. I was unemployed at the time. They excused me from my civic duty because the time that I might potentially spend at the courthouse was time that I could have spent looking for a job.

The third time was almost more lucrative than the previous experiences. This was in the fall of 2006. I had been called in to the courthouse on Monday morning. I sat in a room with about thirty other people, quietly reading a John Irving novel, for two or three hours. Eventually, they sent us all home, requesting that we come in the next day. This routine was repeated over the next two days, though by Wednesday I was reading a book of short stories by T. C. Boyle, having finished my Irving novel the night before. At the end of the third day, we were told that we didn’t have to come in anymore, that a new potential jury had been selected for the coming week. I didn’t come any closer to being selected for a jury, but I lasted longer in the pool. I came home $45 richer.

The fourth, and final time, was in the summer of 2009. I was, at the time, employed at Developmental Services Center, where I worked with adults who had developmental disabilities as an employment counselor. I provided on-the-job employment skills and training for adults with autism and Down’s Syndrome. The week that I was called for jury duty, however, coincided with the first of two weeks that representatives from the State of Illinois were on site for inspections and accreditation approval. Naturally, I was needed at work to ensure that my programs for clients were running as smoothly as they ought to.

I confess to there being a weird sense of accomplishment in never having to have actually served on a jury as many times as I have. Jury duty is, somewhat, an inconvenience, and I have managed to beat that system a whopping four times. But there’s another side of me that is actually disappointed. The actual act of serving on an actual legitimate jury sounds fascinating and I would like to have that experience at least once.

I blame the desire to have this experience on movies and television. Visual entertainment has somewhat romanticized the idea of serving on a jury for me. They depict it as being one of the more noble civic duties that one can perform. Your inclusion in the panel of twelve can have a profound effect on another person’s future, you know? Does the defendant before you have to go to jail for committing a crime, or do they get to return home to be with their families? Sometimes that decision is a choice between life or death. It’s ironic that this romanticized imagining is not tainted by the fact that my own real-life experiences with jury duty have amounted to little more than extra comic book money and the chance to quickly read books that I would have been reading already in the first place.

Have you ever served on a jury? I ask because it occurs to me that I don’t think I know anyone who ever has. The immediate handful of people I can think of who were called in for duty had the same experience that I had during my fourth time at bat: they sat in a room reading a book while they waited to be called. Nowadays, I don’t think you even have to go in. I have a few co-workers who were told to call into the courthouse on the morning of and find out if they were necessary or not. It would seem that only a handful of people are ever lucky enough to get the extra-strenuous taut-with-drama jury experience that is depicted in films like The Runaway Jury, The Verdict, or 12 Angry Men.

Ah, yes. 12 Angry Men. The movie I have chosen to spotlight for this week’s entry.  Made in 1957, this is the jury film to end all jury films. It sets the bar that other jury films have struggled to aspire to over the years. This film was remade in 1997 with a more racially-diverse cast. I have not seen it, but should seek it out, I guess, because a fellow-film-lover friend states that it is a much better film. That’s a bold statement.

It’s a simple film– set entirely in one room– but it’s an effective one. Adapted almost verbatim from the original stage play, it concerns a murder trial that seems open and shut. The defendant is guilty and it seems obvious that he will be sentenced to death, until one juror points out the possibility of his innocence, forcing the entire jury to reconsider their stance. The film speaks very powerfully to a belief that one person can make a real difference in the world. There’s a reason that IMDB users have it perpetually rated in the top 10 Best Rated Films of all Time (it sits right now at #5 as I write this): It has a genuinely uplifting message that people are justified in embracing. This is a movie that means a lot to a lot of people.

This is a movie that means a lot to me. And not just for its “be the change you want to see” message, but for almost every aspect of my artistic self. As a writer, I admire the tension wrought in the exchanges between jurors. As an actor, I would die to dig my teeth into at least three of these roles. As a director, I am hard pressed to come up with one stage play that I have had on my bucket list longer than 12 Angry Men (I would have to stage it in the round just for the effect of all the actors directly confronting the audience as they leave the table to avoid the racist rant of Juror #10). As an armchair scholar of film technique, I really dig how the filmmakers have used cinematography to add action to a story that revolves around nothing more than twelve men talking in one room for ninety minutes. That last one is important– notice that the level of the camera gradually changes from above eye level to below eye level as the film progresses. It’s a very subtle technique that I’m not sure I noticed until I had seen the movie half a dozen times. 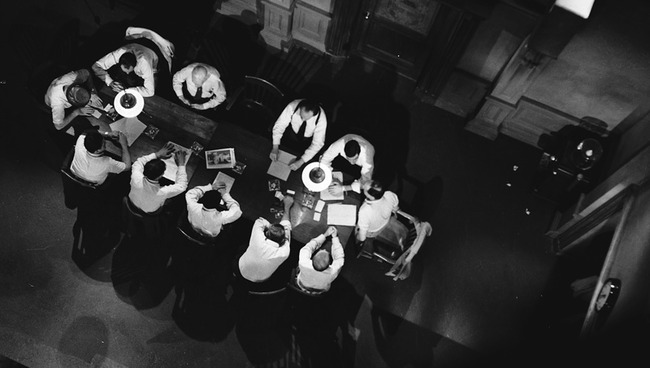 Director Sidney Lumet, who will go on to make some of, in my opinion, the greatest American films ever made (Dog Day Afternoon, anyone?), makes a very auspicious film debut here. To this point, the entirety of his directing career had been in television. This film, admittedly, by its very nature, is not that far removed from the low-budget made-for-television movies he had started with, but there’s something here that elevates the material beyond that. Maybe it’s that Henry Fonda is utterly incapable of a performance that isn’t gut-wrenching. Maybe it’s that the rest of the cast– most of whom were most-known at this point for their work on New York stages– were so defiantly in their element since the narrative revolved around one set, one stage. Maybe Bernard Rose’s script is just that good, paced effectively from dramatic sequence to dramatic sequence (my favorite: Juror #8 rearranging the room to see how far a man who had suffered a stroke can walk in 15 seconds) with enough witty repartee in between to remind us that this is a film about real people with real foibles. The twelve men assembled are key because their varying backgrounds and stations in life help to present a whole series of human issues, among them class struggle, racism, apathy, and the impressions we leave on our children. It’s worth seeing just once– if you haven’t already– though I urge you to ignore the implausibility of the proceedings (anyone who has ever served on a jury can tell you that Juror #8’s confession that he had toured the crime scene and begun his own private investigation would lead, in a real court of law, to an automatic mistrial). I also have to ask you to just pretend that Juror #8’s entire argument doesn’t hinge on an utterly ridiculous coincidence. Indeed, certain things in the narrative don’t hold up on multiple viewings, but many, many great films have laughable plot holes. 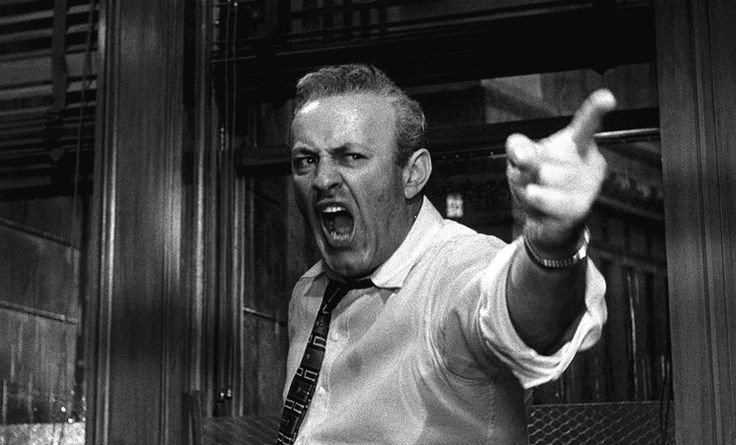 There is a moment in this film that I wish that I had written. It happens later in the film, after Juror #8 (played wonderfully by Henry Fonda) has managed to convince quite a few of his peers that the evidence against the defendant needs reconsidering. Juror #3 (played by Lee J. Cobb) is refusing to budge on his conviction that the defendant in this case (unnamed, and referred to throughout the script as just “The Kid”) is guilty keeps coming back to an eyewitness testimony from a neighbor who claims to have heard The Kid screaming, “I am going to kill you!” at his father just a few hours before said father winds up murdered with a switchblade knife in his chest. It is argued repeatedly that people say things like “I will kill him” or “I could kill you” all the time without meaning it literally. Eventually, as tensions rise between the different members of the jury, Juror #8 calls Juror #3 out on his refusal to equivocate. He says: “Ever since you walked into this room, you’ve been acting like a self-appointed public avenger. You want to see this boy die because you personally want it, not because of the facts! You’re a sadist!” For some reason, that word– “sadist”– triggers #3 and he lunges at #8, forcing the other ten jurors to hold him back as he shouts “I’ll kill him! I’ll kill him!” And that does it. Juror #8 has made his point, calmly stating, “You don’t really mean you’ll kill me, right?”

It’s a great moment, a moment just as well acted as it is written, a stand-out in a movie filled to the brim with great well-acted, well-written moments. A movie that reminds us of the tremendous power that one compassionate individual can have on the world around him.