“The one sacred thing, even to low scuff like me, is a man’s pardner.”

Full disclosure: I have a soft spot for musicals.

Some of this love, I think, comes from my own history as a theatre major. I can sing, and this ability pretty well doubled all the roles that were available to me when the time came for auditions. I have a few movies (West Side Story, Chicago, The Wizard of Oz, Hedwig and the Angry Inch, Across The Universe) I would nominally consider favorites that are, in fact, musicals. I am not bothered in the least that Sandy and Danny are singing “You’re The One That I Want” for no reason whatsoever.

The thing, though, inarguably, that makes a really good musical great is that the songs are memorable. A great musical stays in your mind beyond having seen it because you want to hear the songs again. Because you drive in your car with the soundtrack blaring on Spotify. A good musical should be about the songs. 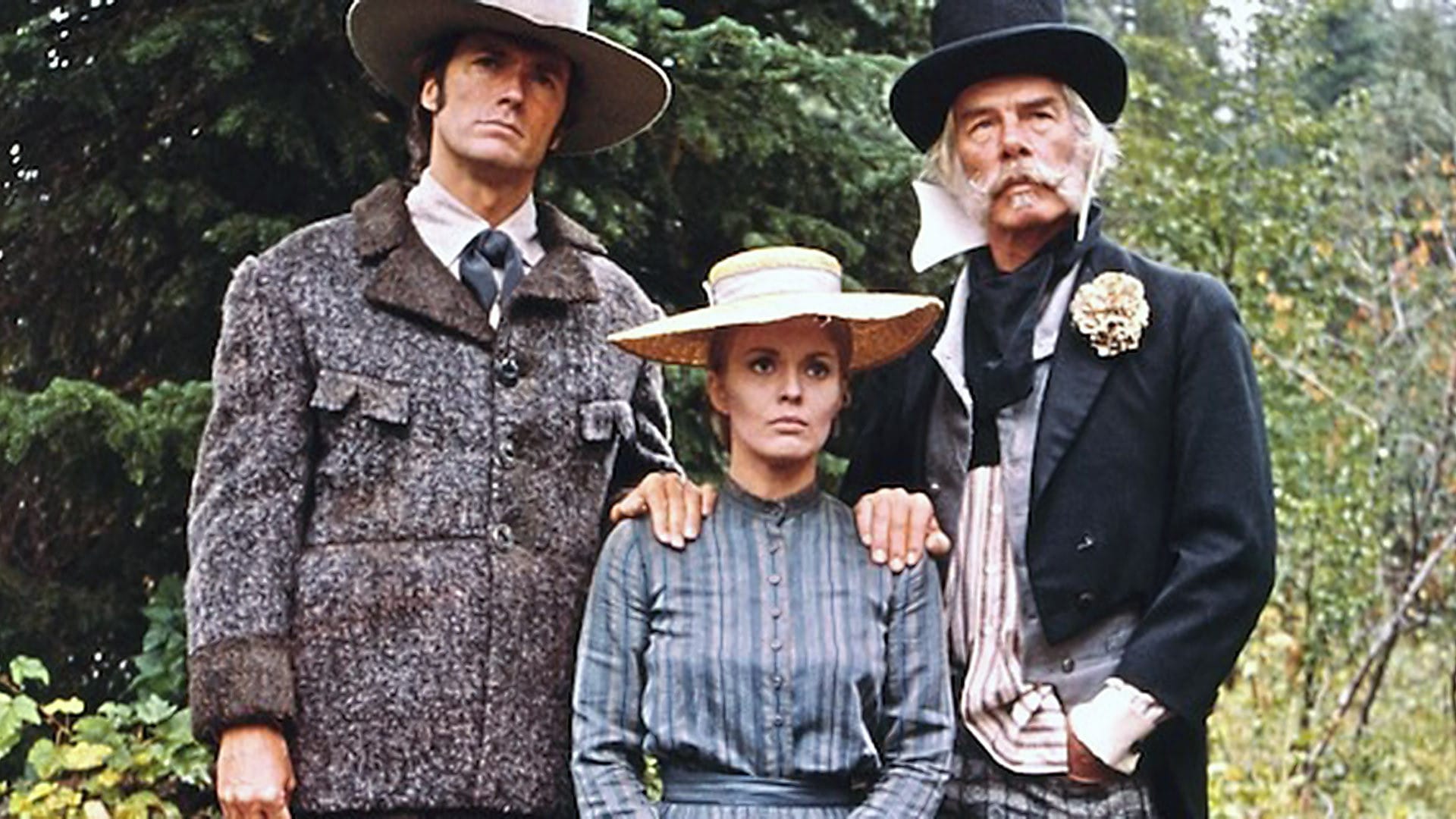 Paint Your Wagon, Clint Eastwood’s seventh major film role– his fourth for American audiences– is a musical that doesn’t really have any memorable songs. The songs that are, at least, passably decent don’t get featured until the final half of the movie. Most of the songs in the first half have no bearing on the plot and could be excised from the film entirely without affecting its quality. To make all of this worse, it wouldn’t matter if each and every one of these songs was a showstopper because they are not being sung by people who know how to sing.

This is a strange, muddled mess of a movie, and I hate myself a little for sitting through all two hours and forty-four minutes of it. I know for a fact that I had better things to do.

I’m being mildly facetious. Not all of the songs are terrible. I rather liked “The Gospel of No Name City” in which a wandering Parson gleefully tells the cast that they are all bound to burn in Hell for their evil sinnin’ ways. I tapped my toe a bit to “Best Things”. I also like “Wand’rin’ Star'” (which I actually knew before watching the movie), but it’s sung by Lee Marvin. Evidence in this film, from beginning to end, suggests that Mr. Marvin is incapable of carrying a tune in a bucket. I think “Gold Fever” has potential (and Clint’s singing voice is not wholly unpleasant), but by the time we get to it, I SIMPLY DO NOT CARE ANYMORE BECAUSE THIS IS A TERRIBLE MOVIE VERSION OF A TERRIBLE MUSICAL AND WHY DID ANYBODY THINK THAT MAKING THIS GOD DAMN MOVIE WAS A GOOD IDEA IN THE FIRST PLACE?!?!

There. I said it: Why did anybody think that making this movie was a good idea in the first place? And why was it so important to Clint that he be involved?

Most of the trivia and errata that I have read about the movie is far more interesting than the movie itself (for example, Lee Marvin was, reportedly, legitimately intoxicated for every second that he appears on screen, and Eastwood had an affair with his co-star and then ghosted her when production ceased). Every bit of research that I have done about the original Broadway production suggests that even the stage musical wasn’t wildly popular, closing its initial run after less than a year. This film, as it turns out, bears little resemblance to the original play at all, keeping only its title, its Gold Rush setting, and about half of the songs. Eastwood’s character was created for the film.

From the very beginning of this film, I was spectacularly unimpressed– even the opening number (“I Am On My Way”) is bland and tuneless– but then I had a small glimmer of hope when I saw that Paddy Chayefsky was given a screenwriting credit. If you’re not familiar with that name, allow me to help you: he’s the Oscar-winning screenwriter of Marty, The Hospital, and Network. Three Oscars! He has three Oscars for screenwriting. You can see why the man’s name came with a promise attached to it. 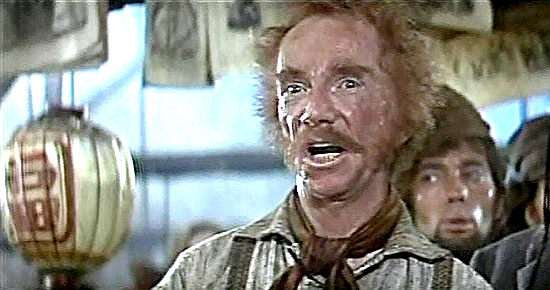 The script that ensues is an unfunny, overly complicated mess. I’ll do my best to give a plot synopsis: Ben Rumson (played by Lee Marvin) witnesses a stagecoach crash, a wreck that kills the brother of Pardner (played by Eastwood). While burying the brother, Rumson discovers gold, and agrees to split the prospect with Pardner if Pardner will agree to take care of him whenever he is too drunk and melancholy to properly function. Later, a Mormon bigamist (John Mitchum) passes through and is persuaded by the horny populace to sell his youngest and more rebellious wife, Elizabeth (played by Jean Seberg), to the highest bidder, which happens to be Rumson. Eventually, Elizabeth falls for Pardner but admits to also loving Rumson. The two men agree to share her and she’s game for this, the product of a bigamous marriage in the first place. I’m gonna stop here because you, the reader, are probably bored, and there’s nothing in the rest of the movie that is any more interesting than what I have already shared. The most interesting thing that I can share about this film– beyond what I have already told you– is that Ray Walston is also in it. He plays Mad Jack Duncan, and I cannot, for the life of me, figure out why he would follow up his success on My Favorite Martian with this film. His presence is just as confounding as everyone else’s.

With two exceptions, I own every single movie that Clint Eastwood has appeared in or directed since A Fistful of Dollars. Some of them, including Thunderbolt & Lightfoot and Bird were exceptionally difficult to find and cost a little bit more than your average DVD. Paint Your Wagon is one of the two that I do not have in my personal collection. So, yeah, I had to rent this movie. For $2.99. From Redbox on Demand. I am embarrassed to have admitted this.

The only reason I am even admitting it now is that this shameful fact serves as the perfect review in ten words or less: “$2.99 was way too much.” 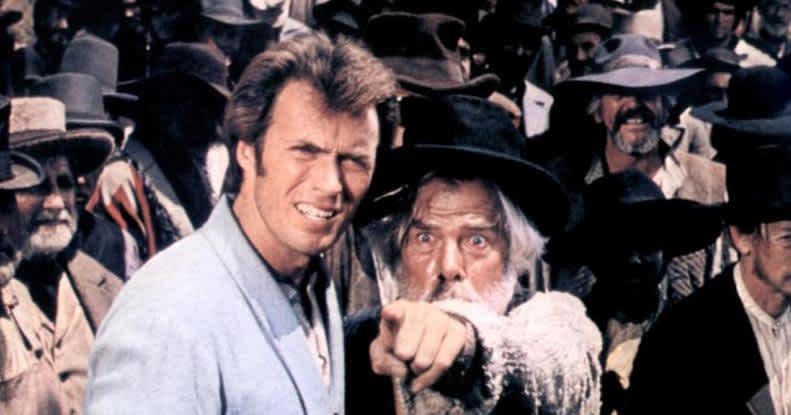