At some point, I decided that it was necessary for me to amass a collection of movies so massive that I would put local video stores to shame. I am not cognizant of when this disease (because, let’s face it– it is a disease) began, but I started buying movies, completely conscious of the fact that I didn’t have enough hours in the day to watch them all. Eventually, I had hundreds of movies and my wife was getting upset by what, essentially, amounted to hoarding. By that point, though, the damage was done and I could not, no matter what I did, curb the compulsion to add one more movie to the accumulation.

I have a particular weakness for the $5 Blu-Ray bin at our local Wal-Mart, and it was in this very bin that I found *batteries not included about six months ago. I justified the purchase because I knew that it would be required viewing soon. You see, the labyrinth has been mapped out for many months in advance, and I decided from the beginning that this film would follow Tremors. While researching connections, I look specifically for movies that provide some inspiration for entries and *batteries not included caught my eye because I recalled loving it so much as a child.

I watched it recently in preparation for this entry and was surprised almost immediately to discover that I recalled almost nothing about this film. Little robot spaceships. That’s pretty much all I remembered, I guess, because not one other thing in this movie looked remotely familiar. It was not, as they say, ringing any bells. The actors in the film were not the actors that came to mind whenever I, over the years, had thought of this film. Not one plot element rang true as something I could have pulled from the ether. It was almost as if, perhaps, I had never actually seen the movie at all. You can imagine the odd dysphoria that hits you when you seem to have no memory of a movie that you would swear you loved, especially when the main character of said movie has dementia.

Regardless, I enjoyed the film and decided to sally forth with my decision to write about it. The problem with that decision is that the majority of the entries in this blog have centered around the nostalgia that surrounds particular films. The people I saw them with. The reasons I watched them. The experience of watching them for the very first time. For *batteries not included, I don’t have any stories like that to share because I watched it by myself a couple of weeks ago in a total state of confusion as to what movie I was even thinking this movie was before I watched it. Anything I may write at this point is, essentially, a review and I try very, very hard to make this particular creative endeavor a little more creative than that. At the very least, short of reviews, the entries that are not nostalgic memoir are making a case for or are recommending movies that might be more obscure and have flown under the radar. But who hasn’t seen *batteries not included?

Besides me, I mean.

Except that I’m almost positive I’ve seen it before. It wasn’t just the little robot spaceships I remembered. I remembered specifics about their interactions in the film. I remembered that one of the baby ships wanders onto the grill and gets accidentally served on a plate as a cheeseburger. I remembered one falling off of a shelf above the stove and landing in a vat of boiling soup. I even recalled one of the adult robot ships floating around the room in a nightgown. To wit: I remembered the things that would have had appeal to my eleven-year-old self when the movie was first released. Everything else about the film was just gone, completely blocked from my memory.

There is, admittedly, not much in the film besides cute robots that would have appealed to me as a child. The things that I enjoyed most about it as an adult are not things that I would have paid much attention to while watching movies as a pre-teen. At eleven, I enjoyed movies that had lots of laughs, lots of action, or some combination between the two. I didn’t invest much stock in thought-provoking stories or pay much attention to exceptional acting. As an adult, however, these two things are what struck me most (I’ll be honest– the 1987 special effects have not aged very well and took me momentarily out of the film quite a few times). It is not hyperbole to claim that this may be one of my favorite movies of the 1980s. 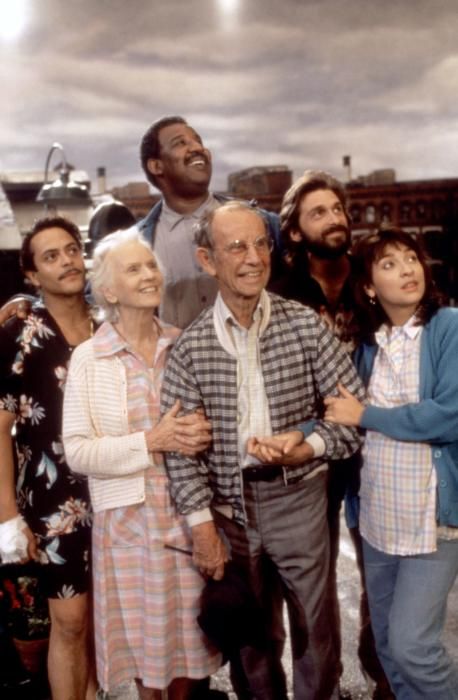 I’ll start with the acting because it really is top-notch. Director Matthew Robbins has assembled an immensely-likable cast that have great chemistry together. If anyone is a stand-out, it is the late (and great) Jessica Tandy, who has the showiest role as Faye Riley, depicting an elderly woman whose dementia has her regressing into a childlike state of wonderment. Tandy’s real-life husband Hume Cronyn plays Faye’s overwhelmed husband, Frank. The cast is rounded out by four subtly-nuanced performances by four overlooked actors. There’s Elisabeth Pena as Marisa, a woman about to be a single mom, struggling to make ends meet. There’s Dennis Boutsikaris as Mason, an artist that is so lost in finding the art in everything that he often remains blind to human interaction. There’s Frank McRae as Harry, the superintendent of the apartment complex. A former boxer, he’s the quirkiest of the bunch, a selective mute who speaks only in quotes from television advertisements. Rounding out the cast is Michael Carmine as Carlos, a neighborhood thug hired by a big businessman to convince the others, by any means necessary, to move out of this building so that it can be torn down. His character is possibly too stereotypical Hispanic for purposes of comic effect to exist in a film made today, but Carmine manages to be very funny, very menacing, and very likable in a mildly-offensive role. You can tell already that the characters alone provide enough human drama to tell a compelling story, and we haven’t even gotten to the little robot spaceships yet.

Therein lies the true magic of this film. I am hard-pressed to think of one other film of this era that so successfully combines whimsical fantasy with a drama that viewers can relate to. About a half hour into this film, after the characters and their plights have been introduced, once Carlos has moved on from trying to buy out their leases to terrifying the tenants with vandalism to their building and personal property, things start getting playful. Faye receives a late-night visit from two robot spaceships that fly into her bedroom window looking for an electrical outlet to charge themselves. Faye is open about this visitation, but no one believes her, thinking that her new friends are a dementia-induced hallucination. Soon, though, broken appliances are magically fixed, the visibly-in-need-of-repair apartment complex is good as new, and the tenants of the building are eventually on the roof witnessing a coupling between two alien spacecrafts that spawns three robot infants. Protecting the new parents becomes a priority for the characters, a thank you of sorts for the work they have done on the building. In some cases, this task gives them a reason to exist at all (especially Harry, who actually repairs one of the infant robots when it is created stillborn). Friendships are solidified, relationships are formed, and each of them, through the offices of adorable alien spacecraft, learns a thing or two about life and how to live it. This is a really, really sweet movie.

The decision to finally sit and watch this movie came at a pretty good time for me because I confess to feeling quite a bit depressed in recent weeks. My family is still picking up the pieces after the devastating loss of my father-in-law. I suffered a shoulder injury that necessitated changes in my lifestyle that have been hard to get used to. Household finances have been a struggle and a concern. I can’t even hardly read the news anymore because the state of the world– politically, mostly– just makes me sad.  But after viewing this movie, I felt good about myself. I was happy, warm with the glow of a movie that took me away from all of that. This might mean that having little memory of the film before I watched it– seeing it “for the first time”– was a blessing in disguise.

As I continue thinking about this movie, I am reminded about the fragility of memory. Memory has, in some respects, become my stock in trade. I have based this blog around the very idea. As a writer, I delight in a photographic recall of the details that make a memory really come alive. But, man, have I struggled lately. It starts, I suppose, with the needlessly devastating realization that I had no memory of this film’s plot whatsoever, but it continues beyond that in more heartbreaking ways. Small things, like forgetting to do a chore that I just said five minutes ago that I would take care of or forgetting to set an alarm. Frustrating ways, like needing to Google a phone number that I call at least once a week or the struggle that I had memorizing lines for a play that I recently acted in. Is this a symptom of my recently-rearing depression? A sign that I am not aging gracefully? Am I doomed to become so scatter-brained that I can convince myself that the thug terrorizing my apartment complex is actually my long-dead son? Will no one believe me when I tell them about the nightly visits from robot spaceships? Will I even remember having seen the robot spaceships?

No. You’re right. I remembered having seen them before.