One of my intentions with the essays on this particular site was to make the films that we jumped to from entry to entry be vastly different movies. To wit: I didn’t want to highlight a horror film and then move onto a horror film. My thinking here was that the dynamics of two completely different movies from week to week would keep the site exciting and fresh. Here I am, only six weeks into this venture, and I am (sort of) breaking my own rule.

But I assure you that these two movies could not be more different.

It’s difficult to describe the story of The Last Picture Show because to some it may seem meandering and without plot. There are small truths in that assessment, but what drives this film has nothing to do with narrative structure. This film is carried by the characters, their relationships and desires, and the brilliant performances from the actors who play them.

Set in 1951, The Last Picture Show centers mostly around three high school students who are coming of age. There are other characters, other stories, but these three are the ones that drive the narrative. It is their character arcs that reflect most of the film’s many themes.

I’ll start with Sonny (played by Timothy Bottoms). Sonny has just broken up with a long-time girlfriend, a relationship that has lasted too long, mostly out of either party having nothing really to do besides date the other. As a favor to his football coach, he becomes personal chauffeur to the middle-aged Ruth Potter (played by Cloris Leachman). Both of them are lonely (albeit for different reasons), and their relationship soon becomes sexual. Jacey (played by Cybill Shepherd) is the daughter of one of the town’s oil barons. Seeing how miserable her mother is in this one-horse town, Jacey has set her sights on getting out of the area at all costs, a plan that doesn’t sit well with Duane, her long-time boyfriend. Duane (played by Jeff Bridges) comes from a poor family, his career options don’t include much beyond joining the military, and all he really has going for him is that he gets to be boyfriend to the prettiest girl in town. Simply put: he isn’t good enough for Jacey, and he is well aware of this fact.

The film is set in the fictional town of Anarene, Texas, a small oil community that is dying a slow death. The oil is drying up. The economy is bad. The citizens have been packing up at an alarming rate, moving on to the next opportunity in larger, more profitable towns. The only three truly successful businesses in town– a diner, a pool hall, and a movie theatre– are all owned by the same man. His name is Sam the Lion (played by Ben Johnson). He is aging, fully aware that his days of running these three businesses are numbered. Besides, how do you operate businesses when there’s no one left in town to patronize them?

I saw this film for the first time in 1997. I worked at the time as the assistant manager of a Blockbuster Video store. One of my co-workers had seen Paper Moon at my suggestion, and then immediately requested that I view this film. He was, to say the least, flabbergasted that these two vastly different films were made by the same person. I saw Paper Moon first, but I was forced to agree.

In my initial viewing, I was a bit put off by some of the character motivations. Jacey, in particular, seemed problematic. For her, sexuality starts out as something to protect. It becomes something to explore. Eventually, it becomes a weapon, a powerful means to an end. Ultimately, it makes her character more than a little unlikable. She damages, without remorse, a lot of people on her journey. It took repeated viewings for me to finally understand that Jacey’s character arc is completely plausible and not entirely her fault. Jacey’s behavior is learned from her mother. It stems from misconstrued advice. Advice that gets tangled by a mind too naive to interpret it. Jacey is, in many ways, the catalyst for one of the movie’s most important themes.

This is a movie full of theme. And most of them are not evident without repeated viewings. But one theme looms large over any other content in this film: loneliness and decay. From the opening tracking shot of tumbleweeds blowing across a desolate main street, it is clear that this town is dying. The rich are really only rich on paper. Every long shot of the main drag reveals even more rotting, boarded-up buildings. And almost every one of the characters in this film has a dream or aspiration that is either unattainable or dying on the vine. Be it Jacey’s mother, who married for money instead of love, or Ruth Popper, destroyed once by her repressed-homosexual husband and then again by the unthinking selfishness of Sonny.

This is a bleak and sad film. But that doesn’t mean that there isn’t a lot to love about it. For starters, the acting throughout is top-notch. The film, in fact, received four nominations for acting at The Academy Awards (Ben Johnson and Jeff Bridges for Best Supporting Actor, Cloris Leachman and Ellen Burstyn for Best Supporting Actress). Ben Johnson and Cloris Leachman actually won. Incidentally, Ben Johnson’s win is a remarkable milestone. Clocking in at just under ten minutes of screen time, it still holds the record for the shortest film performance to win Best Supporting Actor. Don’t let the length of his appearance fool you; Ben Johnson’s depiction of Sam the Lion is easily the heart and soul of the movie.

This film is also quite a technical achievement. Peter Bogdanovich, a friend and mentee of the great Orson Welles, is one of my favorite directors from the 1970s because of how effectively he wields a camera. A good amount of theme is reflected in the film’s visual style. Shot completely in black and white, the abandoned streets of town appear to be more desolate than they are. The entire film is shot at eye level, with subjective shots galore. It creates a claustrophobic atmosphere that thrusts a viewer into the scene as if they were involved in it themselves. There’s a fight scene done in forty-five quickly-edited shots without ever establishing a master shot. This image has always been impressive to me: 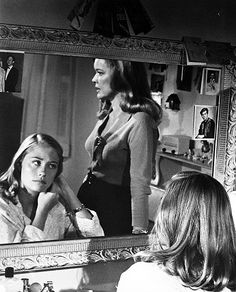 Imagine the amount of work that went into framing this shot without including the camera crew in the mirror’s reflection. And notice how large Ellen Burstyn looms over Cybil Shepherd. A major theme of the film– relationships between parents and children– captured in one still image.

Bogdanovich’s greatest strength, though, is in extended long shots. Like in Paper Moon, many sequences have few cuts for editing. One sequence, in particular, stands out for me in this regard: a scene shot at the town tank dam. In this sequence, Sam the Lion delivers a powerful monologue about “the one that got away” that lasts for almost three minutes. As he speaks, there’s a dolly in towards him, the camera holds on his face as he continues talking, and then the camera moves back out when he completes his speech. Ben Johnson’s performance in this sequence is so mesmerizing (and probably the reason that he won The Academy Award) that a viewer almost doesn’t notice that the speech was delivered in one take.

I spent my formative years in a town not unlike Anarene. I currently live in a small Illinois town that experienced a major economic slump when the Air Force Base within its city limits closed its doors for good. This movie resonates with me for those reasons alone.

If I were to make a list of my personal favorite American movies from the 1970s, I would be remiss to not include this film somewhere in the top 5. It’s a haunting movie, and by the time it concludes with an ambiguous ending, one is left to sit and wonder about the possible allegory.  Think about the town and Sam’s reflection on its people and its society. Consider his position on aging. I think that Bogdanovich has personified his personal feelings about American cinema in the character of Sam the Lion. He sees Sam the Lion as an old fimmaker, such as John Ford or Howard Hawks (both of whom have visual styles that are clearly being paid homage here), and Sonny as himself. Mentor and protege. Classic film as a lost art in an era of burgeoning cinematic change.