This is my favorite horror movie of all time.

To explain that, I risk boring you with a considerable amount of backstory that is only tangentially-related to the actual film, but my feelings for this movie, my outright primal fear of it, run deep.

1983. The fall semester of my second-grade year. My parents were still married. We lived in Sidney, Illinois.

Television was a big part of our lives. Every night of the week, there was at least one show that my family watched religiously. Sunday afternoons were often spent watching reruns of Star Trek and The Twilight Zone with my father. On weekday mornings, I knew that it was time to start walking to school because That Girl was ending and Bewitched was beginning. Once school was finished, I hurried home to watch Scooby Doo, Where Are You? (our NBC affiliate showed back-to-back reruns every afternoon at 3:00). We even had HBO.

A funny thing about HBO: we were not allowed to watch it. Yes, we had it, but it was sanctioned as a parents-only channel. Sure, sometimes we’d gather as a family and watch a pre-approved movie, complete with popcorn and blankets in case we fell asleep on the floor, but, for the most part, HBO was verboten. Don’t get caught on HBO without permission!

At school, my friends and I spent recess recreating our favorite movies on the playground. Whole new chapters of Star Wars were written by rambunctious seven-year-old kids once the argument over who got to be Luke and who got to be Han was settled. On the swings, we were Elliott flying past the moon on our bicycles. An innocent trip across the monkey bars turned us into Maximillian Schell trying not to be consumed by a giant, galactic fireball (The Black Hole, by the way). Someone always had a new idea, depending on what had been viewed the night before.

It was our friend August who suggested that we play Poltergeist. The game he proposed had very little to do with the movie if I am recalling correctly, but his enthusiasm for the “awesome” movie he had seen over the weekend managed to convince the rest of us that we would not be cool if we did not witness this story for ourselves. Over the next few weeks, more and more of us were testifying that Poltergeist just might be the greatest movie ever made. But not me. I was not allowed to watch it. I had, in fact, not even bothered to ask.

I did, however, formulate a plan.

See, there’s this publication called TV Guide. In this publication, there’s a complete listing of every single television show or movie that will be airing at any given time on any given day. All a resourceful child has to do is scan said publication for showings of a particular show or movie– say, Poltergeist– and pick one taking place when nobody might be around to catch him watching it.

I didn’t have to wait long for an opportunity to present itself. 1:15 in the morning on the upcoming Saturday. I had been invited to spend the night at James’s house on the upcoming Friday. James lived up the street, had a television in the basement rec-room, parents that didn’t have HBO under lock and key, and plenty of Legos, comic books, and Star Wars action figures to help me force myself to stay awake. With the volume turned down low, Poltergeist could be viewed surreptitiously without my parents being the wiser.

I almost didn’t make it until 1:15 am. But when the magic hour came, I hunkered in as close to the television as I could, with James asleep on the floor behind me in a homemade tent. I was quite proud of myself. I was a rebel, up past my bedtime and disobeying my parents. I was also, incidentally, terrified.

I saw things in Poltergeist that I was not prepared to see. Maggots eating a piece of steak left on the kitchen counter. Demons guarding doorways. A midget woman with a scary voice. A tree that burst through the window and ate a little boy. Ghostly skeletal hands emerging from the static and snatching little girls inside the television. Rotten corpses rising from the swimming pool. And the worst thing: a stuffed toy clown that had to be torn apart limb from limb before it could strangle a seven-year-old boy to death.

A smarter child would have turned the television off twenty minutes into this horrifying film, but I was just as terrified not to watch. If I turned the movie off, I would be wide awake and all alone in a strange home. Going to sleep was certainly not an option. And turning off the train wreck that unfolded before me was only going to lead to me eventually having to admit to my friends that I was a big loser and too frightened to finish the movie. So I watched it. Every last frame. By the end of the movie, I was ready to do just what Steve Freeling was doing and put the television outside.

Eventually, I got busted. To be more accurate, I confessed. But I really didn’t have much choice. I didn’t have any other plausible explanation as to why I was, all of the sudden, completely unwilling to watch television. No more Scooby Doo reruns after school for me. It was listening to records and reading comic books. Watching The Dukes of Hazzard on Friday night with my dad turned into playing with Legos on the sun porch. I got away with this for a week or two before we went to a neighbor’s family barbeque and I walked in to see Poltergeist on the television in the middle of the afternoon. It was the part where the scientist tears his face off.  I went into a near-apoplectic fit of terrified crying, and the jig was instantly up.

I’ve been petrified of stuffed toy clowns ever since.

I watch a lot of horror movies. It’s an obsession that started in middle school with my childhood friend Paul, who seemed particularly adept at finding the most possibly-obscure horror films around. I’ve gone to the movie theater several times within the past year and shelled-out hard-earned cash for overpriced concessions and the thrill of possibly being scared. But I’m never particularly scared. Unsettled, maybe. But never scared.

Not like I was with Poltergeist. That movie still scares me. From the bottom of my gut, I’m just about instantly uncomfortable as soon as the movie begins. I remember how terrified I was as a child and ask myself why oh why, are you doing this to yourself again?

And that’s the thing . . . this is not a particularly scary movie anymore. At least, it shouldn’t be to an adult who has seen far worse things than trees bursting through windows in horror films over the years (have you seen the Hellraiser movies?! Jesus!). It could be argued that the film itself doesn’t actually hold up very well over time. Some of the special effects are very obviously not real (the aforementioned face-peeling scene looks especially fake as compared to today’s computer-generated effects). The long-standing rumor that Steven Spielberg might have had a bigger hand in directing this movie than once believed is very evident in more than one sequence that is heavy-handed in family-friendly cutesiness. But the movie centers around horror that happens in the safety of your home. To children. As a result of common household appliances. And toys. It’s scary as hell to a child and viewing it now always takes me back to that initial paralyzing terror. That vulnerability. That gut instinct I had at seven that it was quite possible that watching this movie might make me die of a cardiac arrest before I had ever driven a car or kissed a girl.

That god damn clown might have fucked me up for life. 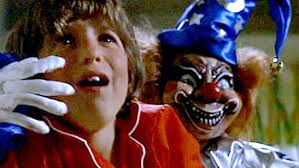