How the hell have you not seen this movie?

The preceding statement is a direct quote from my wife. Precisely what she said to me when I told her that I had never seen The Ghost and the Darkness.

She was not my wife yet. We were barely dating, maybe a month. We were in that phase of a new relationship where you share the books and movies that inspire you in an attempt to help them better understand what makes you tick. I had shown her Natural Born Killers (which bored her). And Magnolia (which she found too depressing for words). And High Fidelity (which she kind of liked despite the presence of Jack Black, whom she, as a general rule, cannot stand). I remember showing her When Harry Met Sally as well, but I don’t recall if she liked it or not. She must have because we’ve been together now for 12 years.

She showed me Secondhand Lions, Miracle, The Replacements, The Fast and the Furious, and The Ghost and the Darkness. There were others along the way, but those stand out as the ones I really appreciated her sharing with me.

Especially that last one.

I can understand her incredulity about my never having seen it. She knew enough about me by this point to know that I love love love Rudyard Kipling-esque adventure stories. She knew that Michael Douglas is one of my favorite actors (I might have also shown her Wonder Boys). She knew that I had a special fondness for Val Kilmer (as does she). And she knew, above everything else, how much I love Butch Cassidy and the Sundance Kid, a movie that shares a screenwriter with The Ghost and the Darkness. This should have been a movie I ran to, no?

Here’s the thing . . . and I now acknowledge the in-retrospect stupidity of what I’m about to say . . . but I never saw this movie because . . . well . . . because Roger Ebert hated it. And I mean hated it. His review only gives the movie a half star. He says the movie “is an African adventure that makes the Tarzan movies look subtle and realistic. It lacks even the usual charm of being so bad it’s funny. It’s just bad. Not funny.” Now, I’m not trying to pick a fight with the deceased, but he and I clearly did not see the same movie. To me, this movie is riveting from beginning to end. Even the scenes that are just Val Kilmer and Michael Douglas chatting while they sit in a tree waiting to be potentially picked off by lions are riveting. I say this now, though. Having seen it. Back then, I did whatever Roger told me to do. We’re from the same hometown. 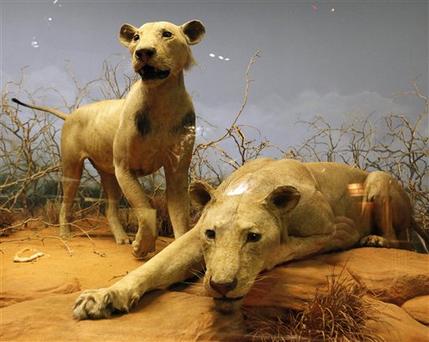 So, my wife (she was my girlfriend then) and I watch this movie. And I’m into it. Really, as they say, digging it. And we get to the end of the movie and the voice-over narration tells us that “If [we] want to see the lions today, [we] must go to America. They are at the Field Museum in Chicago, Illinois” and I realize that I have actually laid eyes on these lions. I’ve seen them. They’re terrifying. They’re on display at one of my favorite museums. This made the movie so much cooler.

Have you seen this movie? It’s quite good, despite what Roger Ebert had to say. It’s quite gruesome and bloody, but still worth watching. 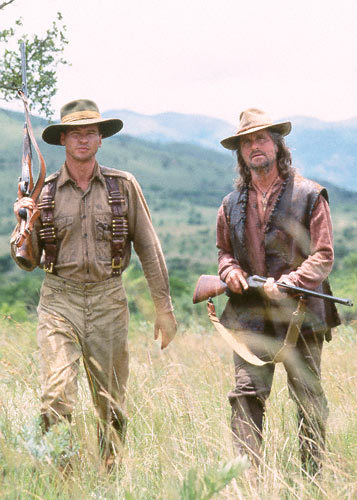 It takes place in Kenya. 1898. Lieutenant Colonel John Henry Patterson (played by Val Kilmer) is hired by Sir Robert Beaumont (played by Tom Wilkinson) to get the construction of the Uganda-Mombasa Railway back on schedule. Patterson is a crackerjack bridge engineer. He can build bridges. But he cannot kill lions, and there are two of them sneaking into tents late at night and eating his crew. Patterson brings in famous American hunter Charles Remington (Michael Douglas) to remedy this problem. By the end of the movie, Remington has not only helped Patterson kill the lions but has helped him find the bravery within himself. It’s all based on a true story and I find it utterly captivating.

While researching this piece, I stumbled across an interview with the director of this movie. His name is Stephen Hopkins. In the interview he laments that this film “was a mess.” He comments: “I haven’t been able to watch it.” And I’m just over here thinking that my wife and I cannot possibly be the only two people who really like this movie.

Let’s take a closer look at this . . . Rotten Tomatoes, my go-to website for aggregate critic scores, gives this movie an overall critic score of 52%, which means that more than half of the reviews compiled on the site and available on the internet are favorable. But barely. We might as well say that 1 out of every 2 critics thinks the movie is a piece of hot garbage. Highlights of the major critics include Kenneth Turan’s assessment that the film “can’t transcend a too-familiar script” and USA Today‘s description of the movie as “Jaws with claws.” A critic that I have never even heard of (Kevin Carr from 7M Pictures) says, and I quote, “It sounds like it might be a good movie, but it ain’t.” It should also be noted that the USA Today review that I have already cited chides the movie for “mumbo jumbo about the lions being supernatural demons unleashed by the imperialistic white man”.

I point out that last tidbit so that I can remind readers that the movie takes place in Africa, is adapted from a true story (more specifically, from a book written by one of the men who survived the actual experience), and I DOUBT THAT WILLIAM GOLDMAN MADE  THAT PART UP! Nothing gets my cinematic goat more than a critic who seems to be willfully misunderstanding a movie. It’s all a matter of opinion, to be sure. But that particular knock against a screenplay sounds like it might have been written by a critic who is afraid of lions and needed an academic reason to hate the movie to avoid admitting that it frightened him.

For me, I have to process the movie by how it made me react to it. Even the worst comedies excel as comedies if they make you laugh. Bad action films work if the stunts are thrilling and the fight scenes are choreographed well. There are truly atrocious horror films that worked for me because they had at least one sequence that legitimately scared me. In essence, any movie, no matter how bad or poorly-made, works on some level if it accomplishes exactly what it sets out to do. From there, it’s just a matter of determining if you’d ever feel compelled to watch it again. And my wife and I have watched The Ghost and the Darkness many, many times.

I think this movie has a lot going for it. For starters, it is paced really well. The lion attacks are explosive and gory and they are evenly-placed throughout the narrative. You’re given just enough time to get over the last one when another one occurs, this one even more explosive and gory than the last one. It also builds tension well. There is more than one sequence that makes you think the lions are about to strike when they don’t and just as many when they strike before you anticipated it. Second, Vilmos Zsigmond’s cinematography perfectly captures, if this makes any sense at all, the isolation of the vast African prairies. Third, Michael Douglas and Val Kilmer are just as engaging together as you would think these two incredible actors would be. And finally, man oh man, Jerry Goldsmith is utterly incapable of composing a bad score. The score to The Ghost and the Darkness is a personal favorite in the canon of this under-appreciated film composer.

One final point in this film’s favor: I’m not remotely suggesting that they don’t give out Academy Awards to mediocre films, but The Ghost and the Darkness did win an Oscar. 1997. Bruce Stambler. Sound Effects Editing. A minor Oscar, yes. But it does lend the film some merit unrecognized by critics. And apparently, the film’s own director.

Some time ago, my Three Nerds And A Movie cohort, Greg, spent the better part of an entire year compiling a lengthy list of his 100 Favorite Films. He did comprehensively-detailed entries for every single movie on the list, working backwards from 100 down to his personal favorite #1 (SPOILER: It’s E.T. the Extra-Terrestrial). It was grueling for him, time-consuming, but ultimately enjoyable to read and popular among his readers. He challenged me to do the same sort of list, and I copped-out, opting instead to do a personal top 20 instead. I included The Ghost and the Darkness in my personal list. It was the only film to be included that I had seen for the first time within the decade prior to doing the list. I think that tidbit says more about this movie and what it means to me than anything else I might have written here.

The Ghost and the Darkness works for me. And even if, for sake of argument, it is a half-star film and I’m just blind to it out of nostalgia or sentiment toward my wife, I get the worst sort of chills every time Val Kilmer reads the letter from his wife, unaware that The Ghost is stalking him in the brush. It’s the sort of reaction a movie like this wants.